Do not mistreat or oppress a foreigner, for you were foreigners in Egypt.

Wednesday I joined about fifty other people to stand in solidarity with an immigrant who faced deportation during a routine ICE (Immigration and Customs Enforcement) check in. It was a sobering and eye-opening experience for me.

What is this about “ICE check ins’?

Depending on the conditions of a particular immigrant’s arrangement for living/working in America, they may be required to present themselves periodically to an ICE office. The actual conditions vary greatly, and my understanding on the subject is incomplete. My understanding is: meetings may be as simple as demonstrating they continue to meet the terms of their visas (e.g. still employed with their sponsor, or still enrolled in college). For immigrants who have been through the justice system (including undocumented workers who have previously been deported), it might mean demonstrating they are meeting the terms of their parole, or other prior arrangements with ICE. But there are a lot of edge cases. Asylum seekers (including refugees) are particularly at the mercy of this (poorly structured, incompletely accountable) system. Like most systems this one is hardest on the most vulnerable.

A disturbing new trend is that immigrants presenting themselves for an ICE check in may be swept up for deportation. It’s worth noting, loudly, that immigrants who show up for their appointments are playing by the rules. These are folks who are trying to do the right thing.

Last week I received an email from a group at my church, affiliated with several other immigrant advocacy groups, including IMIrJ — the Interfaith Movement for Immigrant Justice. (There were other groups involved as well.) A woman named Belinda had an appointment at the local ICE “Processing Facility” (it is literally blocks from my office — much more about this later). The network was mobilizing to accompany her to the appointment, a strategy that in other instances has belayed detention or deportation. I had never met Belinda and didn’t know her story.

At 9:30 am I walked down to the ICE Facility, and was eventually joined by about fifty other folks, many from my (new) church. I saw a few people I knew, including a woman who knows my family pretty well and speaks really good Spanish. (Which I do not.)

Lots of people, maybe hundreds, had ICE checkins that day. It seems no one but the federal staff was expecting that. The interfaith groups certainly weren’t — we were in theory all there only for Belinda. Apparently after the election last fall, the local ICE agents postponed all these check-ins until about two months after inauguration, in anticipation of changes due to the new administration. So they were processing a three- or four-month backlog.

Everyone was stressed out somehow: agents, contractors, immigrants, churchy people, me. But the churchy people were also…well this was kind of a hobby for us in a way? The agents and contractors, they were at work. And the immigrants…this was a hugely shitty and legally mandatory day for them. So that disconnect — the people whose attendance was optional vs. those who had to be there — created its own unpleasant friction.

It was crowded inside the facility. The church groups were mostly not let inside — only two observers went to accompany Belinda. The staff asked most interviewees to wait outside — dozens of people jammed under an overhang just out of the rain. Mamas, papas, grandmas, grandpas, people in suits, women in hospital uniforms, guys with construction vests and steel-toed boots. Lots of little kids and old people.

All these quiet, orderly, hardworking people were scared and anxious like I have never been in my life.

The closest comparison I can think of is when we were moving to/from China and had to get our dog Bismarck through customs. We were worried he might suffer heat stroke or be separated from us entirely. It was scary and stressful, but we had interlocutors working with us, and even still I couldn’t deal with it. Like that, but instead of “maybe my dog will get sick” it was “maybe I won’t see my kids again.”

One man waiting in line told us about dropping his daughter off at school. “Be a good girl. If I’m not here to get you after school, your grandma will. You need to be a good girl for her if I don’t come back.”

Imagine having that conversation with your kids. “…if I don’t come back…”

As the crowds grew the scene became uncomfortable in multiple dimensions. Most of the well-meaning churchy White people were standing under the awning. They were mostly older people and mostly didn't speak Spanish. Many of us were painfully oblivious to the desperate brown people waiting in the rain. Eventually we had to be reminded to move out away from the awning so people waiting to get in didn’t have to stand in the rain. The security guards — all working for private contractors, more in THIS later as well — were as polite as could be expected. But some were on edge too.

As we waited for news of Belinda, people began filtering in and out of the facility. Someone in the church groups conceived the idea that we should applaud or cheer for folks coming out. “Congratulations on not being deported (today)” ? It was a strange thing to do. I hated it.

I was glad to be with my Spanish-speaking acquaintance. She had done this before. She stood near the door and greeted folks arriving for their check-ins. She could explain — in good Spanish — why all these white people were standing outside the ICE facility. And she could explain where to wait.

After an hour or so, one of the immigrant advocates, a guy named Marco, began a speech of sorts for the newbies like myself. He sketched for us the process of being interviewed, and then detained. Detainees from this facility are transported on private buses to a for-profit, contract facility in Tacoma. From there people are further processed (“like something industrial” as Marco noted) — into the criminal justice system, or to another facility on the Mexican border for ultimate deportation, or to embassies, or back home, or to who knows where. Unlike a criminal verdict, the outcomes are opaque.

There are people in America who are being disappeared. That they are not citizens doesn’t make it right.

As Marco was speaking, two innocuously marked buses pulled into the facility. They had generic, vaguely eco-style branding: “Geo Transport.” A private prison transport contractor. That’s when I noticed that this building, which I have driven and walked and ridden past literally hundreds of times, was constructed like a small prison.

I had never thought about this building before, which I can almost see from my office. Until maybe two weeks ago, I had no idea what it was. I thought it was a shipping/courier company (“Geo Transport?”) or maybe an industrial U-Stor-It type place. It has no signage. For years its most prominent feature was a set of garage doors onto Macadam, and a covered parking garage. But they remodeled it a few years ago. At that time they moved the garage doors into an internal courtyard and built a secure fence around it. (Maybe that’s when ICE moved into it? Or was ICE always there?) The courtyard is really ingenious: just like the set of gates and doors for cars at a prison. A prison so milquetoast you barely notice it. Right next to the hippie charter school, across the street from a food cart pod, a block away from the Spaghetti Factory.

The site of Kafkaesque horrors — families separated, bureaucratic nightmares, the stuff of panic attacks — has been right under my nose for years. *I ride my bike right past it every day. * 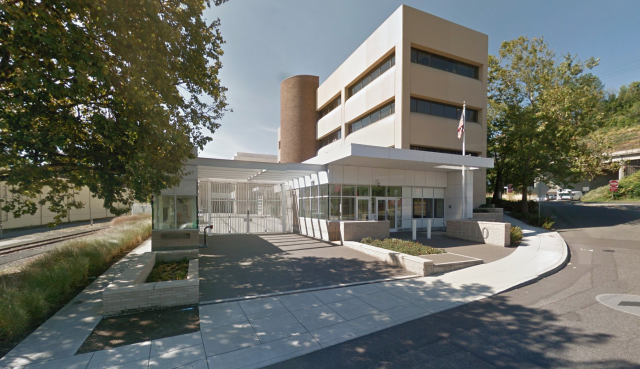 The stressed-out contractors working the doors and vans at this innocuous building were all hired during the Obama administration, or before. Prior to Wednesday, I was vaguely aware that the New Cruelty on display at America’s ingresses was really just the Old Cruelty, but with the friendly chrome stripped off. My Guy was doing this too.

I’m not Adolf Eichmann (I hope)…but I am struck at the banality of my complicity in the suffering of would-be Americans. Immigration was an abstraction. Something happening away over there, in Arizona or Texas, maybe. In obscure airport offices or law firms in the suburbs. This despite my own family’s many ties to immigrants: Jenny’s expat upbringing, her ESL teaching job, my kids who learned Spanish at the preschool run by a Mexican-American family, my many friends who have become citizens, many many colleagues working for tech companies on H1B visas.

This is not abstract. It is happening two blocks away from me right now and it involves real human beings.

We can have a reasonable debate about the security of our borders, but human beings will reap the fruit of that debate. It will mean families separated, lives shattered, GPS ankle bracelets, unmarked vans shuttling human cargo between unmarked buildings, stressful days waiting in the rain clutching a folder full of bureaucratic ephemera. It will also mean other human beings will have to make those things happen: federal agents, contract security guards, bus drivers, lawyers, bureaucrats. They will have to reap that fruit too, and it’s my opinion that it will hurt their souls.

Our reasonable debate should include, at a minimum, that this system operate with transparency, and by public servants, not private contractors. It should further include that the real human beings affected by it are treated with dignity and compassion, even if they are being deported.

America is better than this.

I wrote this on St. Patrick’s Day, one of the most immigranty days of the year. I have no Irish blood that I know of, but this story is boundless for me. America is better than this. I get misty imagining the immigrant story: at last, a place of refuge. My forebears — three generations or more back, now — came to this country desperate and tired. They spoke obscure dialects and had unusual religious practices. They waited in the rain clutching bureaucratic ephemera, stressed and scared about what the uniformed man would tell them: can we stay? For we too were foreigners in Egypt. 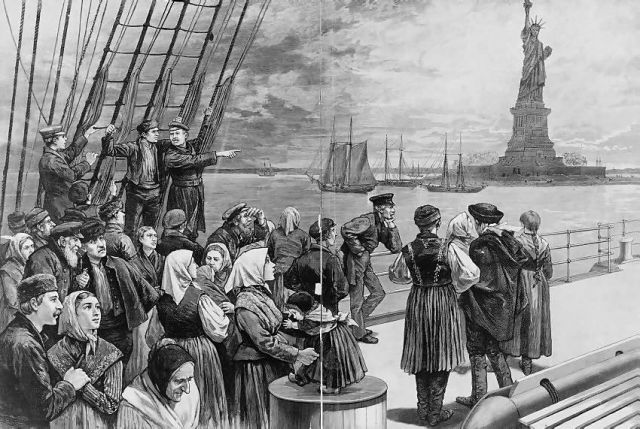 After about 90 minutes, Belinda and her interlocutors emerged from the facility. She was OK. No detention, no deportation. Good news for her.

I don’t know though how many people did disappear in those “Geo-Transport” vans to the shadowy private facility in Tacoma. After we learned the news about Belinda, the churchy people filtered away. I stuck around for a short while with a few of the prominent folks from the non-church advocacy groups. “I work a few blocks from here. I can be here almost anytime I need to be. Next time I can bring cookies and coloring books for all these kids.” Next time.

There’s no comment section but you can send me an email: [my first name]@[this domain]